Spreading our wings beyond E17, all are welcome to join us in songs of rage, hope, and even humour, at the horrors of war, division and injustice in the world. 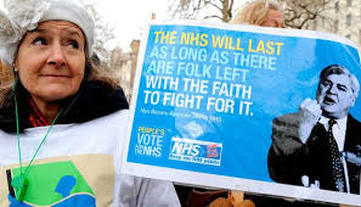 Who? Anyone, any age, who wants to sing, shout, wave              a banner or just come along with us. Join us at
the workshop or travel with us from Walthamstow
How? We'll learn songs to sing along with combined
Campaign Choirs, many of them with new lyrics
to familiar tunes.  We'll have songsheets for
anyone joining us later in the day.
​Why?   To demonstrate our faith in a NHS worth
fighting for.  Check out this video and this one. 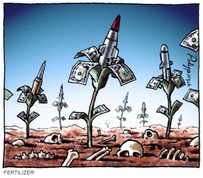 Rise Up and Protest against the Arms Trade 23rd April 2016  once again we joined  East London Against the Arms Fair  (ELAAF) to protest at the Excel Centre's support for the Arms Trade​.  It was the day when runners came from all over the country to register at the Excel Centre for the London marathon.  We handed out leaflets
and gathered signatures for a petition to the organisers asking them to put an end to this profiteering from genocide. See January, below, for more details.

We joined campaign choirs from all over the UK to sing together on the Stop Trident
CND demonstration against renewing nuclear weapons . Tens of thousands of demonstrators marched from Hyde Park to Trafalgar Square to say No to government plans to buy a new Trident system at a cost of over £100 billion. These are weapons of mass destruction that can kill millions. They don't keep us  safe and they divert resources from essential spending.

Protest against the arms fair January 2016

On 16th January 2016, we joined East London Against the Arms Fair  (ELAAF) in their musical protest at The ExCel Centre.    Every 2 years, since 2001, London’s ExCel Centre has hosted the world’s largest arms fair, where weapons, tanks,  missiles and torture equipment are sold to regimes that oppress their own people and/or attack their neighbours.    ELAAF has been campaigning tirelessly to inform people attending other events at this venue and ask them to put pressure on the owners to stop hosting arms fairs.  Singers and non-singers are always welcome at their monthly protest (see ELAAF web site for details).  Together with the Campaign Against the Arms Trade, and Stop the Arms Fair we want to put an end to Britain's profiteering from this whole deadly business. “War against a foreign country only happens when the moneyed classes think they are going to profit from it” (George Orwell). 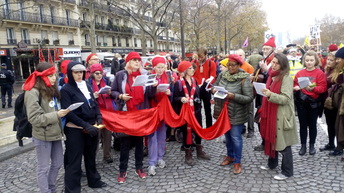 We ("Leve-toi en chantant") went to Paris on 11th December 2015 with Andrea Encinas and we sang with Welsh and French singers at the  Climate Action Zone (ZAC) in Northern Paris. On Saturday 12th we joined the 15,000 demonstrators brought together by 350.org , to draw the Red Lines which must not be crossed in a commitment to achieving sustainable climate targets. People joined in as they passed, and you can catch a few of us singing (about 6 minutes in), in this report from the Baltimore Real News channel.   That evening we were joined in song by over 50 Friends of the Earth activists at the Generator Hostel.   Click here to download our Paris Songbook
The Rise Up Singing workshop on Saturday 5th December focused on songs to sing in Paris on 11th/12th December, at the end of the Climate Summit including  this Sami yoik - an indigenous form of music from the arctic circle! Download sheet music for the yoik here.  On Sunday 29th November, we joined campaign choirs from all around the country to sing as one Big Choir with a shared songsheet.  You can download this, and sound recordings/links from Raised Voices Choir website, where you can also find a map showing the route of the march and where we'll be singing.    Some of us also joined a 'flash mob' at St Pancras Station from 7pm on Monday 30th November.  You can find a link to notation and sound files for the song we sang at the bottom of the Paris Can You hear Us flyer.​
For more political interests see Julia's personal web site